Hu Ge was recently spotted to have attended former girlfriend, Xue Jianing’s musical, “Orphans of Zhao Family”. At the end of the musical, both also took a group photo together on stage. Some fans began to speculate that the actor has reconciled with his ex-girlfriend. In the picture, the actor a black fisherman hat and stood behind Xue Jianing. He also appeared to be smiling very shyly, while Xue Jianing was smiling brightly and brilliantly.

When asked whether Hu Ge had reconciled with his ex-girlfriend, a member of Hu Ge’s staff denied the rumours, and explained: “The director of this musical is a friend of Hu Ge for many years. The group photo taken on stage that day was also called by the director last minute. We’re sorry for the fact that it has attracted so much unnecessary conjectures!” 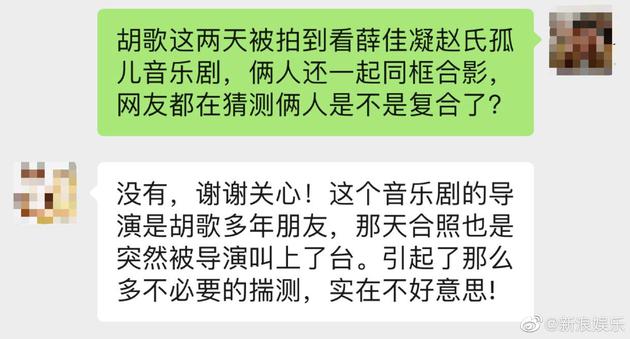 It is reported that Hu Ge and Xue Jianing fell in love in 2006 and broke up in 2009. The actor once cried when he spoke about Xue Jianing in an interview and said, “She is really good.”

Though the two have broke up a long time ago, they still remain good friends and remained in contact. While some fans may continue to harbour hopes for the two to reconcile, it is best to respect their privacy and support them in their respective careers.

A detailed look at Hu Ge and Xue Jianing’s relationship can be found here.