On the 27th of June, Yan Yongqiang, suona player from the band Fruit Planet signed to Wajijiwa, issued a response as to why he suddenly unfollowed his fellow band members on Weibo.

Fruit Planet was one of the four bands signed by Wajijiwa after the fourth season of The Coming One: Superband. While Yan Yongqiang is a prominent suona player, and has had plenty of solo opportunities due to his skill with the instrument, fans have noticed that the suona is not present in the music that Fruit Planet has released. Instead, he is usually playing a digital saxophone for most of the band’s songs and performances.

Many worried fans speculated that he was intending to leave the band after he posted some photos  on his Weibo on the 23rd of June with the following text.

Lychee sea salt (everything it should have, it does)

After I finish drinking this, I will say goodbye to all unhappiness 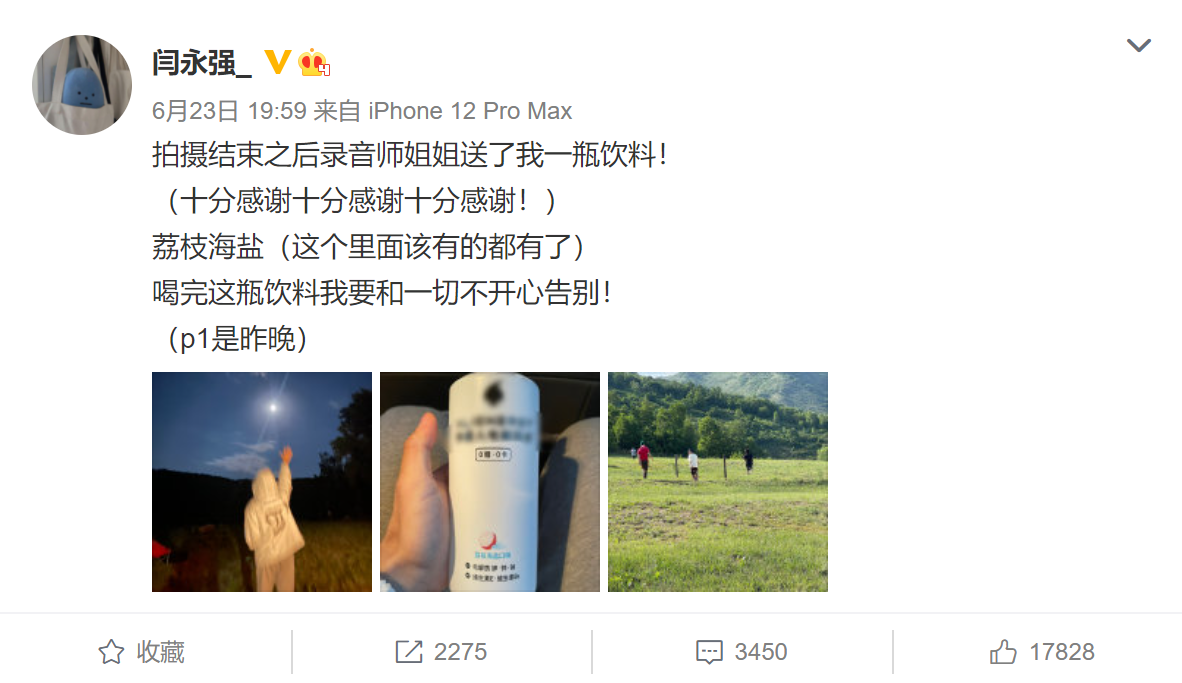 He then proceeded to unfollow his fellow band members, leading to speculation and a hot search about his intentions with the band.

On the 27th, Yan Yongqiang posted a statement to clarify the situation. In his statement he apologises for causing trouble and implicating innocent Fruit Planet team members, and also clarifies that he has previously brought up withdrawing from the band, but this has yielded no results. This apology was later deleted.

1. Fans of Fruit Planet, my own fans, and passer-by fans. A few days ago I went mad and did some foolish actions, and I want to apologise now to all the fans and friends passing by. I apologise!

2. Something happened while we were in the middle of filming that greatly disappointed me and made me very sad and the emotions I had bottled up spilled over. After this situation, I lost control of my emotions causing me to act rashly and unfollow people. I also implicated several innocent team members, I am sorry!

3. Unfollowing them was definitely a naive and impulsive idea, at the time I got caught up in my emotions, and I thought I wasn’t popular enough for this situation to have a lot of impact, I was only thinking of myself. When I woke up and saw I had an entry on the hotsearch, I was extremely regretful. Apologies.

4. In the Weibo post I deleted, the words in the image are the whole reason for my actions, but the picture only points to a part of me. The rest, I won’t continue to talk about, the rest would just be like reading out my ID. Family members, you don’t need to guess, if you try and guess then more people will be hurt. I am specifically making this post to stop keeping everyone in the dark. I only want everyone to understand the situation, and I don’t want to hear anymore malicious speculations and attacks. Now, the matter has been settled, there is no need to dwell on this issue anymore. I’ve caused a lot of trouble to many groups (if you’re uncomfortable you can scold me). Sorry, everyone.

5. Last year, I brought up withdrawing from the band but was rejected. This year, I mentioned it again but there was no result. So, to fans that have always wanted me to quit, fans of other people, I have a few words: I tried my best, if you think you can help me make it happen, then I will treat you to dinner once it’s done. But at the moment, this matter is unsolvable. If you can’t stand the sight of me then put on some sunglasses. If the sunglasses don’t work then do whatever makes you feel comfortable. I’m sorry.

6. Going with the flow, I will try my best to complete every performance with the band as well as my personal activities. You don’t have to worry about whether my current state of mind will affect the state of the band. As a performer, as a musician, it’s something I must do to give the audience the best visual and aural experience. I will make technical mistakes but I will definitely not disrupt the performance. Don’t worry, don’t cause troubles for everyone! I am sorry!

7. To my own fans: After reading this, don’t be angry. I think we can calm down a bit, be calm! As I was the one that amplified the matter this time, it is my fault. I hope you can gradually accept being a fan of someone that doesn’t like their job, causes troubles, and doesn’t even have their own works, so some messy situations will be normal. But I still have two good friends! They privately both have different ways of giving me a “hug”. Isn’t that great? I will work fast so soy milk sisters (his fan name) have more to listen to and more to watch, and I will continue to learn.  You all can continue to have fun playing Dou Dizhu. I’m fine! Then, I got into trouble. So again, I am sorry! (My behaviour this time might make my next sentence sound a bit strange. I really love peace.)

8. I will try my best to be calm and low-key, but people aren’t machines and have emotions so I won’t follow them again, just in case one day I go mad again, and doing this kind of thing again is not good. I am sorry!

9. Fruit Planet’s album will be released soon. There are a few songs that will sound very exciting live (and sound good). Everyone, come to the live show if you can, just listen to the songs if you can’t.

As an adult, artist, and public figure, you could correctly guide fans instead of misleading fans. Private matters should not be posted on public platforms. Apologies to everyone. I am sorry!

Currently, there is no response from Wajijiwa or any of his fellow Fruit Planet band members. Since deleting the post, Yan Yongqiang has yet to comment about the situation either.