Yang Zi Speaks Up On Controversy Surrounding “The Golden Hairpin”

Yang Zi posted on Weibo in response to the recent controversy surrounding her upcoming drama with Kris Wu, ” The Golden Hairpin.”

She revealed that there have been more and more negative comments circulating online regarding the drama and she could no longer stay silent. Some of the controversial topics that have circulated online include whether Yang Zi or Kris Wu deserved the top billing, and if extra scenes were added by screenwriters to give Kris Wu more showtime. The issue of “who gets the top billing” remains controversial a topic of intense debate, as both are outstanding in their own right.

For context, Yang Zi was a child star who rose to fame through the Sitecom “Home With Kids.” Later on, she became made a name for herself as a top-notch actress, following the success of her dramas, “Ashes of Love” and “Go Go Squid!” With over 55 million followers on Weibo, Yang Zi is considered one of the most popular actresses in China with a large fan base.

Similarly, Kris Wu is also an over-achieving celebrity figure in China. Following the release of his song, “Big Bowl Thick Noodle”, Kris Wu has attracted a massive following as well. He too acted in movies such as “Journey to the West: The Demons Strike Back”, “Sweet Sixteen” and the “L.O.R.D” movie series. Though none of his acting works surpassed that of Yang Zi in terms of popularity, his foothold within the entertainment industry is similarly as strong given his undeniable influence in the music scene.

Yet, because comparisons were constantly drawn between the two leads, this led to constant “fan wars” that broke out the between the fandoms. These wars led to netizens becoming averse to watching the drama itself. 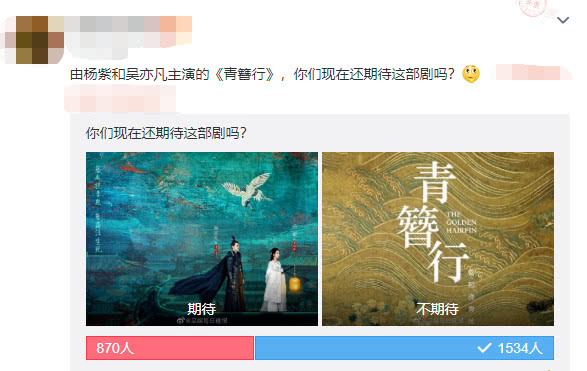 In a poll asking audience if they anticipated the drama, 870 voted ‘yes’ while 1534 voted ‘no’

In a recent post by a Weibo influencer, the question of whether netizens anticipated “The Golden Hairpin” was posed. Almost two thirds of the voters responded “no” while only a third responded “yes”. This is only one instance of the negative reception of the show.

In light of such discussions of the drama even before its release, Yang Zi could no longer remain silent. 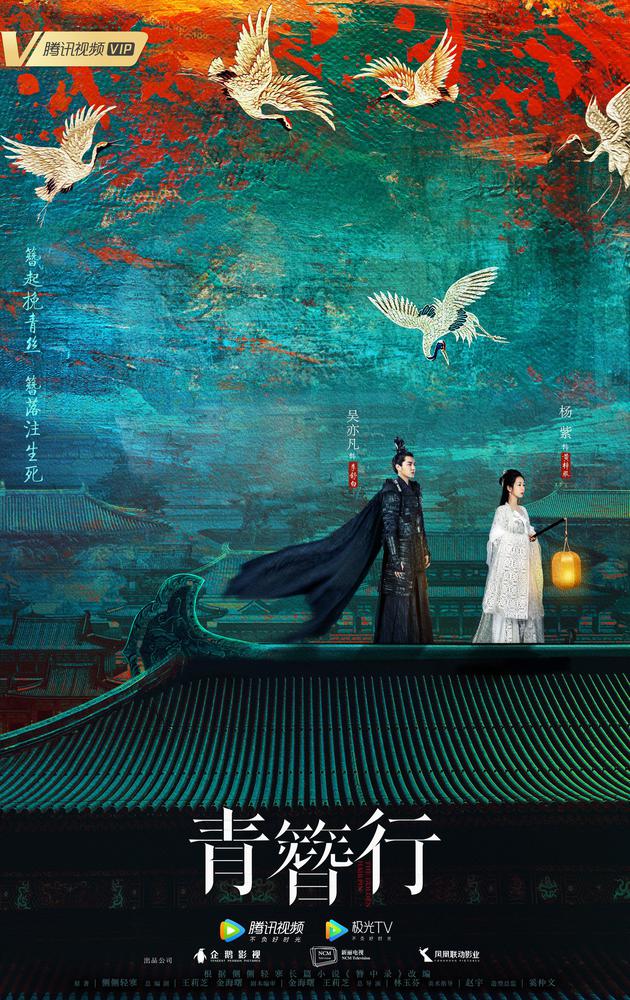 Yang Zi released her official response on the matter:

It’s been 7 months since we started shooting “The Golden Hairpin” and in a month’s time we will be done with the filming of the drama. This drama is the combined effort and hard work of many people. Although we are unsure of how the final outcome will be like, from the moment we received our scripts until now, every single member of the cast and the film crew have been filming the drama seriously.

However, what is happening now is contrary to what we have hoped for. Recently, our drama has been discussed by many people and many non-issues have been brought back to light again. Matters that were previously settled become sources of controversy. Issues concerning the script itself, billing order, and even me going home to get a check-up have become problems. I cannot stay silent in light of these increasing negative comments towards the drama and its crew.

As an actress, my most important mission is to create works. Ever since the day I signed the contract and entered filming for the drama, I have taken responsibility for Huang Zi Xia and this drama. I have always kept in mind the role of an actress is to take the performance and creation of our works seriously. We must also strive and produce works that can satisfy everyone. With regards to disputes outside of the drama, it will be handed over to the staff to deal with it. I believe the production will also abide by the spirit of the contract and properly follow-up on these issues.

So I hope that everyone will not be influenced by the controversies and news about this drama. I believe in our attitude of creating works seriously. When we first met the drama’s director, Lin Yufen last August, we had an agreement to film an excellent drama. During the drama when everyone was too exhausted from filming, Director Liang Shengquan would be in charge of the jokes and liven up the atmosphere. Together with all the film crew, we would work together until 4am in the morning and smile at each despite our dark eye circles.

Please give this drama a little bit more time everyone. Please don’t reject our drama in before it is even released. I will continue to film every drama carefully and work hard to make  “The Golden Hairpin” better. I look forward to meeting everyone soon.

Many netizens have left positive comments on Yang Zi’s post, applauding her bravery for addressing this issue head-on.

Some fans expressed: “Yang Zi you’re bearing the weight of [these criticisms] all alone. You are an actress who cares about the drama, and I am willing to protect your role for you, but will protect your rights and continue to monitor the drama! Ask the production company to abide by the spirit of the contract and focus on putting up a good show!”

Others also added “Respect and protection of rights should be mutual! I hope the production end will continue to uphold the spirit of contract!”

It is definitely not easy to have to address negative criticism in spite of an exhausting work schedule. We can see why netizens are sympathetic towards Yang Zi’s statement. Hopefully, viewers will continue to anticipate the drama as all the film production crew and cast have put their utmost into the production!

What do you think of this issue? Share your comments and thoughts with us below!