Zhang Xinyao, The Former CHUANG 2021 Trainee Apologizes For Sexual Remarks Made In The Past

The idol has since spoken up about the issue and claimed that he had deleted the comments a long time ago. He also took an opportunity to apologize to his fans on Weibo for his past actions.

In 2018, Zhang Xinyao’s comment replies towards a fan was accused of being sexually explicit and inappropriate.

The conversation between him and the fan in a Weibo comment was as follows:

Fan: “You, handsome one, if you’re feeling hot just go home and take a break. Otherwise, I can also help to “blow” you? [Picture attached of a young girl with the caption, “I’m missing you a tiny bit.”]

Zhang Xinyao: I can’t bear to corrupt you all. 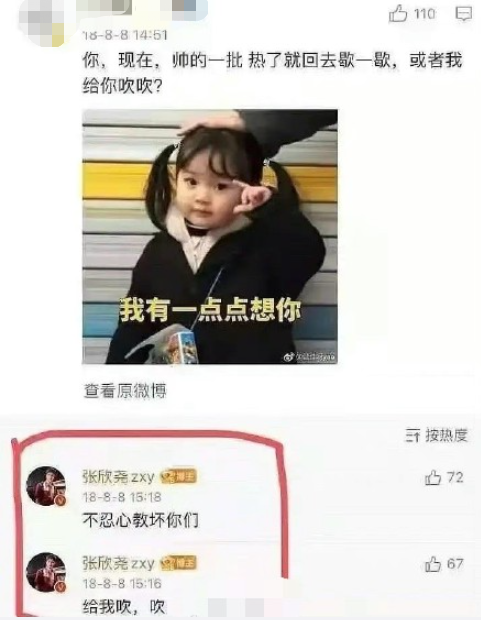 In response to the backlash over his comments, the idol wrote on Weibo

I am sorry! Thank you for your supervision and correction. I have been aware of inappropriate remarks and deleted them a long time ago, and I have been reflecting upon myself deeply. I understand that whether you are a layman or an artist, you must be responsible for your words and deeds in the public. As a public figure, you must be [careful of your image] and and set a correct example to guide the people around you and also the public. I will be stricter with myself in regulating my words and deeds. I will also improve on my ideological education. Once again, I sincerely apologize to everyone!

Comments under the news have evoked different responses from netizens on Sina News.

[+53] The so-called fans are as confused as maggots under the control of idol’s fanclub and the team.