Billie Eilish Apologizes For Anti-Asian Slur Made In The Past

Recently, Billie Eilish came under fire for using the anti-asian slur, “chink” in three short videos. In the video, she was suspected of imitating Asian accents and Black people’s accents. Some netizens accused her of racial discrimination, and argued that she may have had the Tourette syndrome (recurring semi-involuntary movements and vocal tics).

Born in December 2001, Billie Eilish is considered to be the hottest rising singer-songwriter in the United States in the past two years. In 2015, she was under 14 years old and received attention for her single “Ocean Eyes”, and then released “Six Feet Under” and “No Time To Die”. And many other hits, the single “Bad Guy” won the top 100 Billboard singles chart in the United States in 2019, and won the 62nd Grammy Awards in 2020, including five awards including annual production, annual album, and annual song. .

In November 2018, Billie Eilish had confirmed through social platforms that she had been diagnosed with Tourette’s disease in childhood. This is a severe convulsive disease. This syndrome will have repeated semi-involuntary movements and voices, which are common Symptoms include: blinking, pouting, grimacing, shaking your head and other quick and short movements that cannot be controlled by the will, clearing your throat, blowing your nose, making a curse-like sound or a long series of cursing sounds, etc.

Some TikTok users posted a series of videos on the platform with titles. In the first paragraph, Bi Li sang the word “chink” an insult directed at Asian people of Chinese descent in the the background music. This sentence came from the lyrics of the African American rapper Tyler the Creator’s song “Fish”. The lyrics went, “Of an eye I can make a white” “girl look chink” (I can make a white girl look like a chink with one eye). The lyrics reminded people of the iconic action “squinting eyes” description that was a stereotype that discriminated against Asians.

In the second part where Billie Eilish was speaking, her brother asked her “why she has an accent”. The video publisher directly labeled this video a “blaccent”.

In the third video, Billie Eilish spoke vaguely and constantly made strange sounds different from her own voice, which many suspected her to be imitating the Asian accent.

After these three videos came out, there were accusations on the Internet, and Bi Li became a target of public criticism. Netizens believed this to be an act of racial discrimination. Users highlighted that the “c” word she used was a slur, and she attempted to and imitate Asian accents.

But some netizens defended Billie and said that that was still young in the video. And that she is not young anymore now. They also attribute her accents to be due to the onset of Tourette’s syndrome.

At the beginning, Billie Eilish chose to remain silent. After he posted an Instagram that had nothing to do with the matter on June 17, the comment area was full of fans urging her not to escape the situation and to address the controversy.

On June 21, local time, Billie Eilish finally made her voice, but instead of posting on the Instagram homepage, she posted on Instagram Story, which would only remain for 24 hours. The posts disappears automatically after 24 hours. . 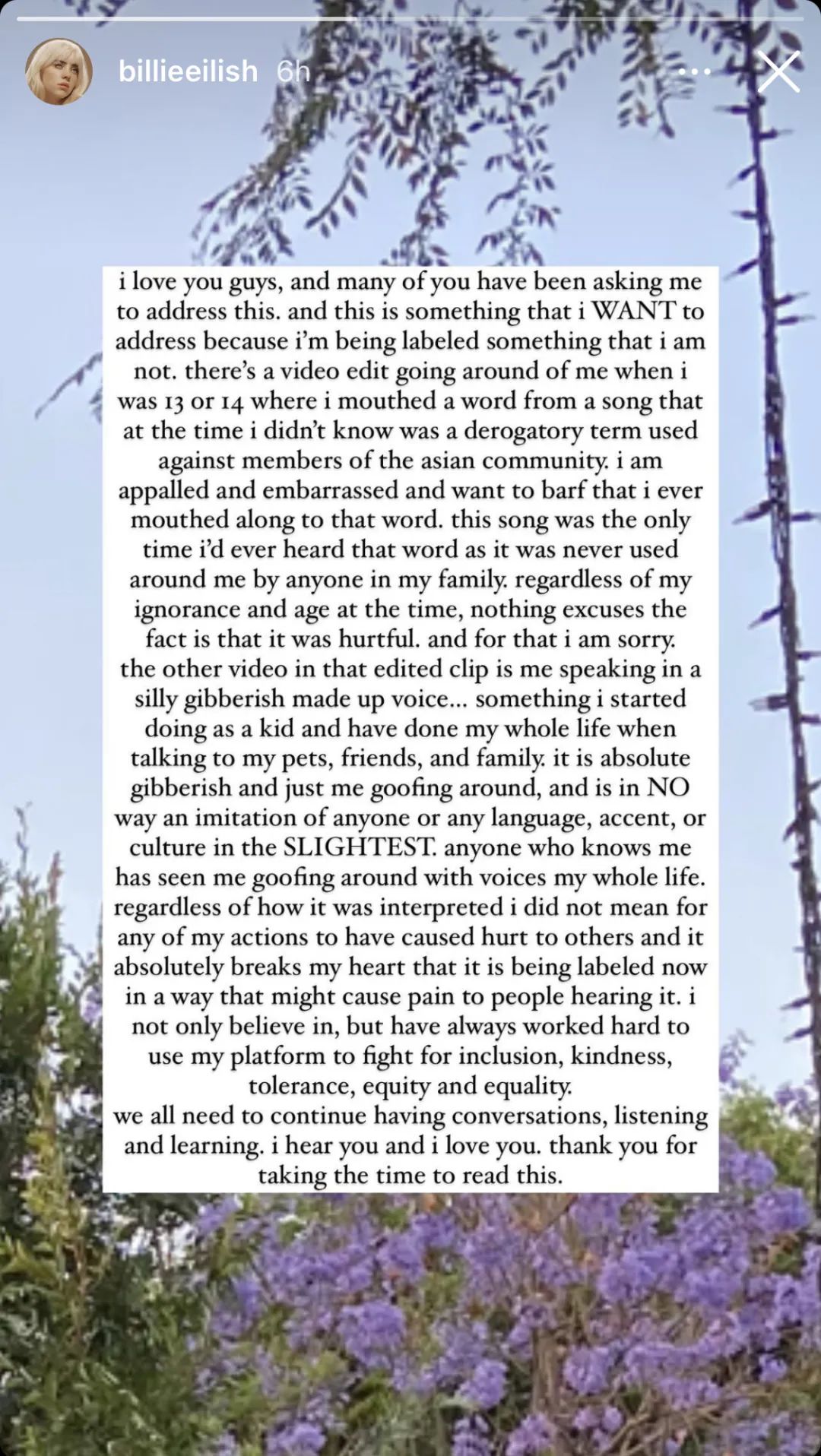 Billie Eilish wrote that she loves everyone, and she also saw that everyone wanted her to respond to the matter, “I really want to deal with this matter because I was labeled as inconsistent with me.”

Billie Eilish also explained that all the videos posted online have been edited. The singing episode was filmed since she was 13 or 14 years old. She was mouthed a word in a song at the time. She didn’t know that it was a word that devalued Asians, and she was “shocked and embarrassed” when she it again.

Billie said that this song was the only time she heard the word “chink”, other than that she and her family had never used the word.

She said that although she was young and ignorant at the time, she had no excuses because it had caused harm to others, and she was very sorry for that.

Regarding the question of imitating Asian and black accents, Billie Eilish explained that the “silly gibberish voice” in the video is a habit she has grown up since she was a child, and she makes this sound when she talks to pets, friends and family , It’s just that I’m making a fool of myself, “I’m never imitating anyone, any language, accent, or culture”, “Anyone who knows me knows that I’m always amused by my voice”.

Billie said that no matter how these clips were interpreted, any of her actions did not mean to hurt others, but now being labeled with such a label may cause pain to those who hear it, which makes her “heartbroken.”

In the end, Bi Li wrote: “I not only believe in, but have always tried to use my platform to fight for tolerance, goodwill, tolerance, fairness and equality. We all need to continue to communicate, listen and learn.”