Wondering how to navigate the Chinese-Pop scene? Need some tips on how to start being a supporter of C-entertainment or how to become a C-pop fan?

Fret not, Daily Cpop has compiled a compact and informative Ultimate C-pop Fan guide just for you. It will brief you on the very basics of how to get yourself acquainted with the C-pop fan culture!

The Basics: An Introduction To Chinese Social Media Platforms.

To start off, the C-pop fandom is extremely unique. No other fandom struggles with having to toggle between two vastly different social media platforms as we do within the C-pop fandom. International fans are all familiar with Twitter, Youtube and Instagram, but the catch here is that not all our beloved Chinese celebrities are on these platforms. For those who are, they may not update very often.

Thus, international fans are left with little choice but to get acquainted with Chinese social media platforms in order to get a closer glimpse of the lives of their idols.

In this guide we will go through three methods in which you can get better access to content featuring your favourite Chinese celebrities.

For starters, most celebrities in China have social media presence on Weibo, Oasis and Douyin. C-pop fans can follow their idols on these platform to get first hand photos, videos and social media posts by their idols.

Let us now have a closer look of these platforms and what might be the difference between them (if any).

#ZhaoLuSi shares a cute outfit post on RED
" A t-shirt I've worn before and a veil skirt .. another new piece of clothing hehe ''#赵露思 pic.twitter.com/OEseNIfG71 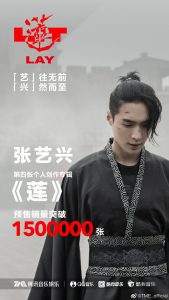 In China, QQ Music and Netease Cloud music are the two main sources that provide music. Migu and Kugou music are also common music streaming platforms. Chinese artists generally do not upload their music onto YouTube, Spotify, or Apple Music (as they mainly promote in China). Thus, it is recommended for fans to access these above two apps (or at least one of them) to stream and listen to your idols’ music.

However, to be able to access these two apps outside of China, users will need a VPN service such as Transocks.

What You can do to Support Your Idol / Fandom

1. Supporting a band member’s solo career is the norm.

Among netizens in China, it’s normal to support a boy group member’s solo career. This does not indicate any “betrayal” to the full group at all since some members may have already pursued an acting career before being part of a band or group, or may have already debuted as a solo artist before hand. Furthermore, companies usually promote a member’s solo career as well. A good example of this would be Wang Yibo who is from the boyband UNIQ. Although Yibo is still a member of UNIQ, Yue Hua Entertainment dedicate a large amount of resources to supporting his solo career.They have also pumped in considerable support for his band made, Li Wenhan’s solo career as well. But still, they are considered an active band as their weibo page continues to post updates from time to time. It is not unusual to support a member’s solo career over the C-pop group itself.

It is common to use Chinese words to describe certain fan or idol behaviours. A famous C-pop internet slang would be “si sheng” which is the short form for (私生饭), which means “obsessive fans” who engage in stalker behaviours towards their idols.Other common terms also include “jia you (加油)” which means “keep going”, “dai pai (代拍)” which commonly refers to photographers hired by fans to take photos of idols while at work/in their daily lives, often illegally These photographers then resell the photos at a high price to fans or fan clubs who are willing to pay for it. We will make a list of popular C-pop terms for you in a later post, so stay tuned to be updated!

3. Learn to recognise the difference between a rumour or an official news source on Weibo.

Often, Weibo is swarmed with rumours that are well disguised as an “official news” source. News platforms such as toutiao and even Sina Entertainment like to hire opinion or fan writers, who often write about celebrities from a personal (sometimes biased) viewpoint. As much as possible, it would be best not to bring these ungrounded rumours onto Twitter as “Weibo rumours” tend to anger the feelings of international fans especially if it is unfounded.

The pink box with a “notice to right holders” section on weibo usually means the articles are opinions of individual writers and are not official information.Articles with a pink box on Sina Entertainment usually indicate that the article represents only the thoughts of the author and not Sina entertainment. Although some of them may be factual, it is not officially announced by the idol or their management.

While you can easily find some music or drama videos uploaded onto Youtube by a fan of the celebrity, it is always best to support the licensed content released by your idol.Buying an album and streaming a song on an official music platform (such as QQ Music) can help to boost the digital album sales count for your idol, which leads them getting access to digital album awards and such. It will boost the chances of your idols getting nominated for music or drama awards more often then not.So even though its hard, please try to support them on licensed platforms to make a tangible impact.

5. Respect all fandoms and be kind to each other.

As an international fan, you may not be on Weibo but your words and tweets can still be brought over to Weibo to represent the opinions of your fandom. Do always be respectful, as it only takes one unkind act or tweet for anti-fans on Weibo to smear the reputation of your idol whom they associate your behaviour with. Fandom behaviour can affect the reputation of an idol, so do your very best to be kind and courteous for your celebrity!

Here are some threads made by fans on Twitter that we have also found useful when we were creating this guide for you!

Our goal is to create an inclusive and meaningful community for all C-pop fans.

We hope you found this guide useful, and we wish you a good time C-poppin!

Notice: Do NOT reproduce this article (or any parts of it) without proper credits to this website and its authors.